Who was the lady who wore yellow robe in HSDS?

Who was the lady who wore yellow robe in HSDS?

When I read the Condor Trilogy, the connection between the first novel and the second one was very clear. Many characters were there in the second novel. However in the third novel, there was very little connection beside Zhang Junbao, a little bit of GuoXiang and a Lady who wore yellow robe whom I am interested to know more about her a lot, because she was the connection from the main characters in the second novel, Yang Guo and XiaoLongNu. My hypothesis is, she was a daughter of Yang Guo and XiaoLongNu.

In HSDS, she was known as the lady who worn the yellow robe. JY did not say what her name was, what we know is just her family name, because the young Shi Hongshi called her, “Yang JiaJia”. JY wrote that she was 27 - 28 year old, she was beautiful. Below is an excerpt from what JY wrote.

Amidst the sound of music, a woman entered the courtyard, wearing a soft yellow light robe; her left hand was taking along a twelve, thirteen years old girl. The woman appeared to be around twenty-seven, twenty-eight of age; her movements were graceful and her face was very beautiful, albeit looked a little pale, as if devoid of any blood.

She first appeared in chapter 33 at a Gaibang meeting in Lulong. She was there with her maids who played zither and flute. Below is an excerpt from what JY wrote.

Suddenly the zither played three notes successively, ‘zheng, zheng, zheng’, and four young women wearing white appeared on the east and west eaves, floating gently into the courtyard below; each woman had a zither in her hands. The zithers were half as long and half as wide as the ordinary seven-string zither of those days, yet they also have seven strings just like ordinary zithers. As the four women landed on the ground, they stood on the four corners of the courtyard.

Following them, from outside the door entered four young women in black, each with a black long flute in her hands. The flutes were twice as long as the commonly seen flutes of those days. These four women also took their positions on the four corners. Four women in white and four women in black, stood across from each other. Eight women forming a square, the four zithers played a happy tune, joined by the four flutes; together they made a beautiful instrumental ensemble. The music was very gentle and elegant. Zhang Wuji did not understand music, but it was as if the melody were dancing in the air, bringing a pleasant feeling to his ears. Although he was in a dangerous situation, he was willing to stop for a moment and listen to the music.

She revealed Cheng Kun’s evil deed to the Gaibang elders. Zhang Wuji first met her here. He was there to rescue XieXun but he found Zhou Zhiruo was having banquets with the Gaibang Elders and Song Qingshu.

A Daughter of Yang Guo and XiaoLongNu?

In the same chapter (33), she revealed that her parents had a close relationship with the previous generation of the Beggar Clan. Yang Guo and Hong Qigong had a very close relationship, they met at Mt. Hua where Hong Qigong taught Yang Guo the Dog Beating Staff Technique which he felt, he owned gratitude to help the Gaibang in anyway. Below is an excerpt from what JY wrote in the chapter.

“That’s right,” the lady in yellow coldly said, “I have seen the letter, but it wasn’t me who changed it. As I saw this letter, I realized Zhang Bang Longtou had already been tricked by others. My parents had a close relationship with the previous generation of the Beggar Clan. I do not wish the awe-inspiring prestige of the biggest clan in the world, which has been built since the days passed, to be disgraced like this today; hence I decided to interfere. Just think, if Zhang Bang Longtou delivered this letter to the Ming Cult, do you think the Beggar Clan would still have a face to stand in the Jianghu?”

Though, JY did not say which generation of the Gaibang Clan, the timeline between the end of the ROCH and this Gaibang meeting in HSDS was as long as Zhang SanFeng’s age which was more than 100 years. So my imagination ran wild. Her surname is Yang so she must be related with Yang Guo and XiaoLongNu for certain, specially in chapter 39 where JY wrote,

Zhang Wuji walked toward the lady in yellow. Cupping his fists, he said, “I have received many help from Jiejie; my gratitude is beyond words. I wish to know your illustrious name, so that Zhang Wuji can cherish it in his heart day and night.”

The lady in yellow showed a faint smile. She said, “Behind the Mount Zhong Nan, the Tomb of the Living Dead, the Divine Eagle and Gallant Knights vanished from the Jianghu.” [Translator’s note: it was like a poem of four characters each: Zhong Nan Shan Hou, Huo Si Ren Mu, Shen Diao Xia Lu, Jue Ji Jiang Hu.] Finished speaking, she tucked her gown and returned the salute. Her hand beckoned, the eight young maidens wearing black and white followed her floating away.

The word parents and the above passage got my imagination ran to a conclusion that she must be a daughter of Yang Guo and XiaoLongNu.

Was it plausible that she lived that long?

At the end of ROCH, in chapter 40, at mount Hua, Yang Guo met a young boy named Zhang Junbao who at the time was a little Shaolin monk. He and his Shifu, monk Jueyuan were looking for thieves who stole the Nine Yang Manual from Shaolin’s library. Then at the beginning of HSDS (chapter 1) which took place not long after the end of ROCH, Zhang Junbao was chased out of Shaolin, the boy monk later changed his name to Zhang SanFeng. Zhang Junbao also met Guo Xiang who remembered him from the time he first met her at Mt. Hua 3 years earlier at the end of ROCH. Below was an excerpt from HSDS chapter 1.

Guo Xiang turned around and saw a sixteen, seventeen year old man standing there. He had thick eyebrows and big eyes and was very tall. But still looked very young. She met him three years ago at Mount Hua, he was Zhang Junbao. He was taller this time compared to three years ago but he very much looked the same. Guo Xiang was very pleased and said, “Those nasty monks were bullying your teacher, we must go now.” Jueyuan laughed wryly and shook his head and suggested that Guo Xiang should quickly leave now before trouble comes.

Hence, at the end of ROCH, Zhang Junbao was about 13 when he first met Yang Guo and Guo Xiang. At the time, Yang Guo and XiaoLongNu had just reunited after being apart for 16 year. I used my imagination again, let’s say, 5 years later, Yang Guo and XiaoLongNu had a baby girl, this baby girl would be about 85 by the time Zhang SanFeng celebrated his 100 birthday [HSDS Chapter 10]. It was not common for a person to live until 85 at the time, but it was plausible.

If she lived that long, how could she looked to be just 27-28 year old?

She practiced the Jade Maiden Heart Sutra (玉女心經; yùnǚ xīnjīng). JY wrote that, any person practiced it, their physical appearance would age slower than those who lived their lives to the full. Below is an excerpt from what JY wrote in ROCH, Chapter 39

After a long while Yang Guo finally broke the silence. He said, “Long’er, you’ve not changed a single bit. But I have aged.” Xiao Longnü stared at him and said, “No, it’s just that my Guo’er has grown up.”

Xiao Longnü was slightly older than Yang Guo by a few years but she lived in the Ancient Tomb since young and learned internal strength techniques from her master, which required her to purge her emotions. Yang Guo however more readily expressed his emotions, so at their wedding the two already looked about the same age.

Xiao Longnü had practiced this skill since young and had no happiness or worries, so she was even more emotionless than the founder Lin Chaoying. Once Yang Guo entered the Ancient Tomb things changed and as they got closer she found it harder to follow the ‘less speech’, ‘less action’, ‘less happiness’ and ‘less worries’ rules. After their marriage they were separated for sixteen years. Yang Guo traveled around and roamed Jianghu and missed her terribly. Xiao Longnü, on the other hand, was forced to live in this deserted valley and could not totally avoid thinking of him. She found herself practicing these principles again to combat her boredom. When they finally met again it appeared as though Yang Guo was older than her.

In conclusion, I hope, I have provided enough evidences to support my hypothesis. Though, I wish, JY could have written more about her, because I guess, Zhang SanFeng and GuoXiang would know her. This short coming caused my imagination run wild when I wrote about her.

Thank you for reading, I hope, it is not too long. Please feel free to comments.

not a daughter , but descendant, a few generations below

Yeah the general consensus is that she’s a descendant of Yang Guo and Xiaolongnü. Most likely the great granddaughter.

Did JY write it down somewhere in another edition?

No, but it was hinted. Here’s another theory, you can try to translate the article with a translator. I’ll attempt to translate it when I have time. 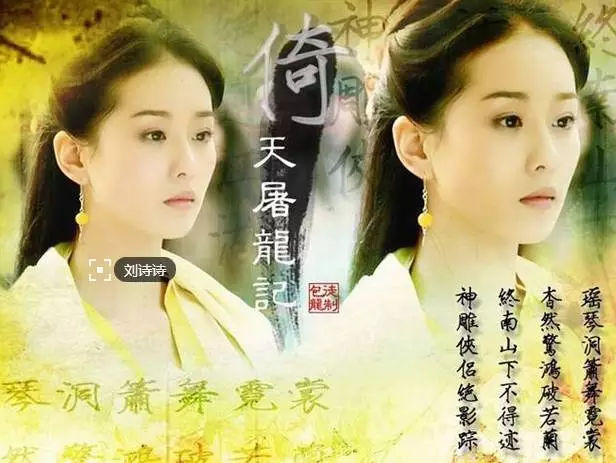 The hints that you mentioned in that articles were just imaginative guessing, just like I did, there was no definite answer to it. If JY did not directly write it, then it ups to the readers to make their own interpretation.

The author of that article speculated what he wrote from a rumor where JY’s original plot for ROCH was, Xiaolongnu would die at the end. When the readers found out, they threatened to not buying MingPao (the news paper which JY owned and where the trilogy was originally serialized), so JY decided to changed the plot to make the readers happy.

Then the author of the article speculated that JY still insisted on having Xiaolongnu died at the end, so JY wrote clues into HSDS.

With that speculation, the author presented a small fan friction in that article which I summarized below.

Toward the end of ROCH, Xiaolongnu left the Bottomless Valley, she did not eat the white fish nor cultivated the Jade Maiden Heart Sutra, thus the illness from the Passionless Flower poison resurfaced. So they went back to the Bottomless valley where Xiaolongnu eventually died. A year later Yang Guo left.

Parallel to that event, YeluQi who was Guo Fu’s husband died. (The author used historical record as the hint for the reason that he died)

Then YangGuo met GuoFu accidentally. They fell in love and decided to be together. When HuangRong found out, she worried that GuoXiang would be heart broken, so she had a talk with YangGuo and GuoXiang who tried to avoid seeing GuoXiang. (This was the author’s explanation why after 3 year GuoXiang could not find YangGuo in HSDS chapter 1)

Later, when the city of XiangYang fell into the Mongol’s hand, GuoXiang found out about the relationship of her sister and YangGuo, she was heart broken and decided to become a nun and later founded Emei.

So according to this small fan fiction, the Yellow Robe Lady in HSDS was a descendent of YangGuo and GuoFu.

The hints which the author speculated that JY left in HSDS were.

There were a few more which the author mentioned, but these were the main ones which I think, relevant.